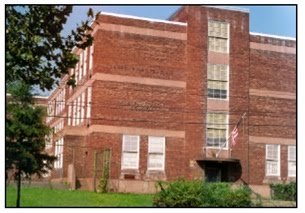 Walter B. Patterson was born in Manchester, New York in the 1870s.

Mr. Patterson obtained his secondary education in private academies, one of them being the Emerson Institute.  Later, he pursued courses at Dartmouth College where he received his A.B. Degree and the Phi Beta Kappa distinction. During his college tenure, Mr. Patterson helped pay his way through school by filling a temporary assignment in the Bureau of Education.  Several years later, he studied law.  He received a Bachelor’s and Master’s Degree in Law at George Washington University.

In 1907, Mr. Patterson was elevated to supervising principal in charge of special schools and activities.  His greatest contribution to the improvement of the school system was the development of activities for physically and mentally handicapped children.  He developed ungraded classes, a health school, classes for children having speech defects and classes for crippled children.  It was also within Mr. Patterson’s province to have oversight of the education of blind and mute children.

His remaining thirty-seven years were spent as a supervising principal involving responsibilities in the supervision and administration of important activities of the school system.

The retirement of Mr. Walter B. Patterson, supervising principal of the Ninth Division, brings to a close forth-eighth years of meritorious service as an officer in the public schools of the District of Columbia.

Mr. Patterson’s work as a school officer has been characterized by a fine acument, rare judgement and marking professional ability in the handling of school challenges.